Why exactly is it so cumbersome to use the multitude of charging networks? 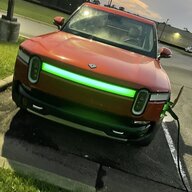 One standard/app/aggregator to rule them all would be great, but if I have to open any app to start a charger then I really don't care that each network has it's on app. I'm doing the same thing to start a session regardless. Three years in and I haven't found the fractured state of the non-Tesla charging world to be much of an issue. Beyond physical infrastructure availability of course.
Explore Adventure LE, CY, RC, BM, 20s (or 21s), Power Tonneau (but would prefer manual ), mats, cargo bars, spare
Estimated Delivery Window: none
Guide Contact: 5/18/22; PBA signed 5/20/22; Truck assigned 6/1/22; Delivery 6/23/22; cargo bars arrived 7/2/22

2025R1S said:
Without Tesla plug-n-charge capabilities, this is one of the only solutions.

I think the only alternative solution is to have credit card readers at each station. This would increase manufacturing costs and increase complexity/points of failure. But it would offer a similar experience to what many consumers have become accustomed to.

For their to be widespread consumer adoption, the barrier to entry needs to be reduced.

There is simply too much friction.

Mobile apps and payment authorization aside; the amount of dongles and styles of charging ports is overwhelmingly confusing for first time EV buyers. Imagine trying to get non-technical consumers to learn all the nuances of J1772, CHAdeMO, NEMA 14-50, CCS, 120v wall outlet, etc.

I will sound like a Tesla fanboy here, but IMO, Tesla has it figured out. The whole charging experience is exactly what people want. While Tesla charging port is not a universal standard, companies like Aptera make the argument that it should be the standard for US consumers - and I agree.

Here is my argument;


Of all the paths forward; everyone switching to Tesla connector in USA seems to be the....best solution. Every solution sucks, in its own way. But this way sucks...the least.

Or put it differently; if we don't unite behind the Tesla standard - fine, but give me something reliable that doesn't take 15 different accounts and mobile apps. This doesn't exist. So....what other options do we have? I know I don't want to deal with dongle after dongle, and mobile app after mobile app. I can't be alone - right?
Click to expand...

The CCS plug is not the problem here. EA / EVgo etc could have had Tesla connectors and all of their issues would remain.

Tesla has to use CCS in Europe.

Totally right. I don't like to include Europe or Asia in the discussion, given they have their own standards (CCS in Europe is not the same as USA).

Speaking purely from a solution for North America; I would still go with Tesla, and Tesla licensed charging tech.

E.g. - no one has to even use an app for payment authorization, it's all plug-n-charge - regardless of the car. Any vendor such as ABB or ChargePoint could install the outlets and the tech. Any car company could install the ports. Any car company mobile application could pull the charge rate and other battery stats - displaying it in the mobile app and on the screen of the vehicle.

It is all just to say - Tesla has perfected it. It feels we're just reinventing the wheel with CCS in North America, and creating massively different charging & EV ownership experiences. Now Tesla just need to open it up and make their proprietary tech accessible for the entire industry. In terms of making the supercharger network available for all - it would be an easy olive branch for the industry - to go all in on Tesla connector. Problem with this solution is the assumption that Tesla wants to open up their port and make it accessible by all. I don't think they want to give up their secret sauce, and will want to keep it as walled off as possible.

In any scenario, perfecting the fragmented and unreliable CCS network seems like a lost cause. Trending in the right direction - maybe. But every week I am disappointed to see a new crop of posts on the various forums like - "my Mach-E won't charge fast. My Lightning gets disconnected after 10 minutes. My R1T won't charge at all." - My heart goes out to these people


Joneholland said:
The CCS plug is not the problem here. EA / EVgo etc could have had Tesla connectors and all of their issues would remain.

Tesla has to use CCS in Europe.
Click to expand...

Nobody wants to pay credit card fees and they want to build brand loyalty. Otherwise, pay at pump with a card doesn't seem like rocket science. I bet I could develop a EV charger without a broken payment system in 8 weeks of work if you give me one with an open API.
You must log in or register to reply here.
Share:
Facebook Twitter Reddit Email Link