Yeah, that looks damped to me.

skyote said:
I don't have any of the old pics, but maybe a quick press of one of the two buttons releases the tailgate? Does this look like the right location?

That's how it looks to me as well. 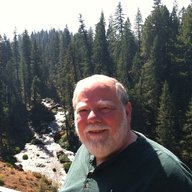 While this may not be a deal-breaker, it is really disappointing.

I'm adding it to my running list of Over-promised and under-delivered.

I'm just venting now and don't actually maintain a list, but here's some of the things that they had previously told us would be included or optional:
-Powered tailgate
-Price is actually higher than they told us/Reuters it would be
-No electrochromatic roof (nor any sun-shade for the all glass roof)
-No removable roof at launch
-No 180 drop down tailgate
-No max battery pack at launch
-No level 3 autonomy
-No Lidar
-No spare tire included

Ugh. I'm depressing myself now. The value proposition is far below what it was when I put down my deposit.

Starting to get worried a bit. Hopefully they haven’t dropped their commitment to flat tow as I’ll have to drop out for sure.
E

StevieD said:
Starting to get worried a bit. Hopefully they haven’t dropped their commitment to flat tow as I’ll have to drop out for sure.
Click to expand...

Yeah, this is a major feature for me. The only other EV I've heard has claimed to be flat towable is the Fisker Ocean, and I can't even find solid confirmation of that.

If the Rivian isn't flat towable, it will probably be years before an EV alternative is available with this feature.
J

I really couldn't care less about a power tailgate. I've never had a power tailgate on a pickup and don't see a true need for it. Hopefully it will have gas struts so it lowers slowly, to help avoid broken fingers, fly rods, etc, etc. On the other hand, the power hatch back on my SQ5 is a very nice and handy feature that I use every time.

I don't have a stake in this game, as I'm getting an R1S.

However, I've owned a lot of trucks...my only tailgate "must have" is an electric lock. My 2015 Chevy had manual key lock, but didn't lock/unlock with the fob, so I installed an aftermarket solution to do it.

The power or dampened tailgates that buddies have on their trucks are a nice touch, but nothing I would personally lose any sleep over.

I would be upset if R1S lost the powered liftgate though. It really comes in handy in way more situations than I expected. Use it all the time on my Grand Cherokee, especially in our current days of curbside pickup & social distancing.
800 hp Rivian + Groceries = Adventure. Looking forward to terrifying children & making passengers gasp, late 2021. If the driving doesn't get them, the obscene volume of my Meridian Elevation 360 audio will.
J

Interesting that they are still figuring this stuff out with production supposedly in as little as 3 1/2 months ? Makes me suspicious they will make the Summer 2021 date. That or they figured it out a long time ago and are just now telling us.
H

jimrichard said:
Interesting that they are still figuring this stuff out with production supposedly in as little as 3 1/2 months ?
Click to expand...

I have a reservation for a Lucid Air Dream Edition as well as a Rivian R1S, so I've been following developments at Lucid as closely as I can. They are following the same trajectory as Rivian, both in terms of removing features that were initially teased and in making changes at what seems to be late in the game.

Like Rivian, Lucid has canceled the electrochromic glass roof that was originally touted.

Lucid showroom cars have power-operated doors that are not going to make their way into at least the early production cars, apparently due to supplier issues with sensors. This is similar to Rivian's now dropping its power-operated tailgate, although the reasons might be different.

Lucid also teased a rear seat that would rival a Mercedes S-Class and BMW 7 Series in room and comfort, but it turns out the foot garages that made that so will only come with the smaller battery pack which is not going to be available at introduction. Rivian has done a similar switcheroo with not offering its larger battery pack at introduction, despite expectations to the contrary.

Good perspective, thanks @Hmp10
800 hp Rivian + Groceries = Adventure. Looking forward to terrifying children & making passengers gasp, late 2021. If the driving doesn't get them, the obscene volume of my Meridian Elevation 360 audio will.
P

That would be the Explore Package. 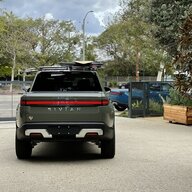 Based on the video Rivian just put out on their youtube channel, looks like one of those driver side buttons on the rear of the bed rail electronically releases the tailgate and that it lowers automatically (dampened).
H

Let's hope the analogy between Lucid and Rivian doesn't carry too far. Amid all the hubbub yesterday about Lucid confirming the reverse merger with CCIV to go public, Lucid slipped in an announcement that their start of production for customer cars has been pushed out.

The launch Air Dream Edition, which was supposed to enter production in April, has been pushed into the 2nd half of the year. Dow Jones is speculating it's actually going to be more like the end of the year.

I have a Tesla Model S on which the non-renewable extended warranty expires in June. Given the very expensive repairs the car needed under warranty (including replacing the battery pack, the rear drive unit, and the MCU), it is not a car I want to own outside of warranty.

I was hoping to trade the Tesla against the Lucid, but now neither Lucid nor Rivian will release their launch vehicles in time. I might risk keeping the Tesla for 2-3 months until the RiS comes out if it stays on schedule, but even a slight delay would widen the gap beyond my tolerance.

I'm actually toying with ordering a Tesla Model X Plaid for spring delivery. (God help me.) I want to trade the Model S for something, and I don't want another ICE vehicle.
E

I can only hope that the power tail gate delete will be a deal breaker for at least a few LE potential buyers. That will move me up in line to get my R1T sooner.
K