I hadn't realized the 135 model will be faster than the 180. And looks like no under-seat storage for the 180 truck either.
R

time said:
I hadn't realized the 135 model will be faster than the 180. And looks like no under-seat storage for the 180 truck either.
Click to expand...

That's not what the chart indicates. The "Gear Tunnel" (350L) is available on all models of the R1T. It is the (95L) under seat volume that is not available on the R1T; presumably where the extra 45KW worth of batteries will be stored.
Last edited: Mar 9, 2019 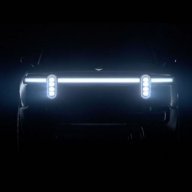 Was deep diving into the specs - if the production R1T keep these approach angle, departure angle and breakover angle #'s, they would basically be class leading in the pickup segment.
B

So the 180kwh pack on the r1t will last from ny to Boston, so about 430m and have some juice left.
The 135kwh did some off/on road range up to 315miles. Could highway miles be worse that off road miles?
Also, im guessing the suv will have better highway range. How much could that be?
J

Babbuino said:
Could highway miles be worse that off road miles?
Also, im guessing the suv will have better highway range. How much could that be?
Click to expand...

Yes, easily as LaGuardia to Logan is only 210 miles.

It is important for prospective new BEV drivers to understand that the practical working range of a BEV is 70-75% of its EPA rated range. Thus a conservative driver plans to stop and charge a 400 mile truck at around 300 miles. Consider LaGuardia to the Portland, ME airport. That's 305 miles and you could, theoretically, do it on 84% of the battery. Most people leave on trips with 90% SoC. You would arrive in Portsmouth with 9% and that would make most drivers uncomfortable. They would stop along the way at a convenient charger with its location chosen by convenience, bladder SoC or, perhaps, the desire to arrive in Portrsmouth with enough charge on board to enable local travel or to enable departure the next morning with enough charge to comfortably make it back to a fast charger on the return route.

Fixed it for you.
I think it unlikely that Rivian will make the top buffer of the battery available for additional range at the risk of accelerated battery degradation. It does allow a manufacturer to advertise a 10% higher EPA range, but with the caveat to not use it. If the Tesla battery management system stopped charging at the level they consider safe for everyday charging, the 402 mile Model S would be listed by the EPA at 360 or so. Tesla is currently the only manufacturer that does this. The owners manuals of other vehicles have no warnings about charging to 100% on an everyday basis, in fact some actually recommend doing just that.
D

What stat would indicate the drain on a stationary battery? So for an example if I park my truck at the airport for two week trip (no charging) with just 9% battery would there be any juice left when I get back? I do leave my car at the airport parking lot quite a bit for travel.
D

This would not be recommended for a few reasons.
As to how much "vampire" battery drain there will be: one of those things we will not know until they are being shipped and users report from the field. Tesla's tend to have this as an issue, other manufacturers are at 1-2 kWh per month (without things like battery conditioning). Things like sentry mode will require the car to "wake up" and use battery power.
D

That 9% was silly on my part since I live 5 minutes from the airport.

It's cheaper to park my car for two weeks than getting a cab but I would most likely have a full charge from home anyways. In Vegas it can get up to 120 degrees in the summer and stay around 90 degrees at night. I would assume that the battery conditioning drain would be on the high end for me.
A

duff said:
That 9% was silly on my part since I live 5 minutes from the airport.
Click to expand...

There's no problem with that in a Rivian. A Tesla owner stays out of the lower 20% region if he can but Tesla is the only manufacturer that makes the battery buffer area available to the driver of the car. Rivian does not do this. Thus there is a large buffer between 0 on the gauge and the actual lower limit of the battery capacity and you have no worries if you go down to -10% or so. Others here have all the details of Rivan's BMS and can give us the exact number.

As to an indicator that phantom drain is taking place the obvious one is that the SoC is declining. Rivian will no doubt have a smartphone app which will allow a variety of things respecting the car to be done remotely. This app will, at the very least, tell you what the vehicles SoC is. The Teslas seem to consume a few percent per day. A 3rd party app that collects data on these things indicates that the distribution mode is about 1.3 - 1.5% SoC per day but note that one of the things that contributes to phantom drain is applications like this one that are periodically reporting info to the app owners central database. With enough of those going (lots of Tesla owners run 2 of these) and the draw can go up to 3% per day or more. The Tesla Sentry mode (which records video from the cars cameras when it is parked) is a huge consumer.

The remarks about going down below 0 above were, of course, a joke. Rivian owners will want to stay out of the bottom 10% of the battery range just as Tesla owners do and in any case, of course, you will want to have enough on board to get home or to a charger when you return home from your trip. To help with this the Tesla does, and Rivian will too no doubt start shutting down some housekeeping functions in order to conserve battery if phantom drain does get SoC too low. A Tesla will not allow the AC to operate when the vehicle is empty if the battery goes below 20% but I don't think that would be considered phantom drain. I don't think your phantom drain will necessarily be larger just because you live in a warm place. Even though it eats several percent of the battery per day it only amounts to a total of a little more than 100 W.

Finally note that if you do come home and find your self critically low there are several chargers within a mile or 2 of McCarran (and Henderson).

I have parked my Bolt at the Phoenix airport in the summer for 5-7 days and see very little drain on the battery. I try to get to the airport with 50-60% on the battery, being at half charge is best for long term storage of lithium batteries. I also park in a garage, so that the hot sun is not beating down on the car all day, it is worth the few extra bucks a day in parking fees, no matter what car you drive.
You must log in or register to reply here.
Share:
Facebook Twitter Reddit Email Link