Guardian Mode patented to transport passengers without requiring a driver

A new patent submitted by electric car marker Rivian aims to create a safe traveling experience without anyone actually operating the vehicle. This would allow the vehicle to transport individuals who are not fully-competent to operate a vehicle to a destination without having a driver present.

Rivian named the patent “Systems and Methods for Operating an Autonomous Vehicle in a Guardian Mode,” and filed it to the United States Patent Office on June 11, 2019. The patent would create a new mode that could allow a physical driver to not actually be present for the duration of a trip. It would instead give the vehicle’s owner the option to request a ride for someone who is not capable of legally or safely operating the vehicle, like a child or a senior citizen. The company calls this capability “Guardian Mode.”

Using examples like a child needing a ride home from school, Rivian mentions that the development of autonomous vehicles are allowing for safe travel without someone having to be in direct control of the vehicle. However, there is the possibility for someone who is not fully competent to still control the car and make use of the vehicle’s autonomous features to travel, even if they are not legally able to.

Rivian explains this point further in the following section:

The new “Guardian Mode” would be activated by initially having a user request a destination for their vehicle. Subsequently, the vehicle would ask the user if it would be operating in “Regular Driving Mode” with a driver present, or in “Guardian Mode” without someone directly operating the vehicle. The car would then decide upon a route of travel based on this selection. “Guardian Mode” would give the person who is present some freedoms within the vehicle, like radio or music operation, climate control, opening or closing windows, or in some cases, request a destination change. All of these options would be enabled or disabled by the owner of the car. They would input a PIN or passcode that would activate or deactivate each of these settings. The patent also states that the vehicle would be in constant connection with a laptop or smartphone to allow for communication between the vehicle and the owner.

In October, Rivian submitted a different patent for a control system that would customize a user’s ability to control certain functions within the vehicle. This was an attempt to increase the safety of the company’s fully-autonomous platform because they recognized that not everyone should have access to some features of the vehicle.

In an attempt to create a safer road, Rivian’s several patents geared toward the development of fully-autonomous driving are a recognition that there are loopholes within the overall framework of the idea. While self-driving vehicles are new and exciting and safer than humans in many ways, there are certain functions that are open for user abuse. One incident of a child getting behind the wheel of an autonomous car could spell disaster for the entire industry and may set back autonomous traveling technology back several years. Before the world commits to a fully autonomous driving future, the industry’s leaders must confront the obvious issues. The submission of these patents is proof that Rivian is facing these challenges head-on. 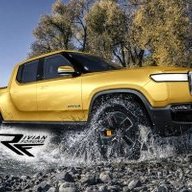 Sounds like they are advocating locking seatbelts that require the owner to release them, regardless of any emergency that is encountered en route. If so, I do not approve at all.

Better and easier is simply to have controls, including steering, brake and accelerator to not respond while in autonomous mode.
H

This patent application seems to be one of those prospective filings just to get a position -- and a brand tag name -- on the record long before any product is available. This is really trying to patent a concept rather than an actual invention. It'll be interesting to see what the Patent Office does with it.

If Rivian succeeds in getting a patent and really views this "Guardian Mode" as an important safety feature for autonomous driving, I hope they will follow the lead of other auto manufacturers in not relying on patents to block the introduction of safety innovations by others. For instance, Volvo never sought to enforce its patent for 3-point seat belts. Mercedes Benz never enforced its patents for collapsible steering columns, crumple zones, and anti-lock braking. The woman who invented windshield wipers in 1903 never enforced her patent.
You must log in or register to reply here.
Share:
Facebook Twitter Reddit Email Link