Decided to give the nearby EA station a go. Everything went fine. My R1T was down to 34%, so decided to give DC fast charging a shot to see what my results would be. There is a new EA station that was put up near me, only 150 kw stations though. One thing to note is that the Rivian navigation does not have it listed, even though its been operational for about 4 months. It was 97 degrees outside, and 3/4 stations were occupied. I used the method I learned from Out of Spec, I used the EA app to activate the charger first, then plugged in. Took roughly 10 seconds for payment to be approved, then 15 seconds after I plugged in for charging to start. Charging started at 146 KW, eventually reached 150 kW at 49%. I only charged to 57%, which took 15 minutes. Max charge speed I saw was 153 kW.

So overall, pretty easy charging experience. There is a cell tower a few blocks away, so the EA stations likely had a strong signal. It at least makes me more comfortable that even at a 150 kw station, in the heat, it charged at a decent rate.
May 2021 R1T Adventure Order with El Cap, BM., 21" wheels, full sized spare, all weather floor mats, electric tonneau
Estimated Delivery Window: July - Sept 2022
Guide Contact: Assigned 5/25/2022
Delivery: 6/9/2022 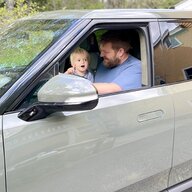 Nice to see reports of positive experiences with charging. All the negative ones can be frightening.
OP
OP

It charged at 211 kWh for about 1 minute, then dropped to 170 kWh. The R1T display said charging speed was limited by the charger. It was only 90 degrees, so wasn't too hot. Total time was almost 12 minutes for 20%. At 60 percent it started to drop below 150 kWh so I just decided to disconnect and go about my day.

Using a 48a Tesla wall connector to charge an R1T
2

Tuesday at 3:47 PM
srnyoung
EVgo and GM are doing Plug and Charge