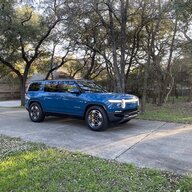 So as a backup plan to our summer vacation we ended up in Galveston for the week.... It's not Italy but still some much needed R&R for the family. I noticed the hotel has what I assume is a Tesla branded "destination charger" for use by hotel guests. I assume this is not on Tesla Charging network which begs the question... would I be able to use this charging station with an adapter on a non-Tesla vehicle? I am assuming and would hope this is a yes..... The answer is indeed yes. You will need an adapter called a "Tesla Tap".
B

ajdelange said:
The answer is indeed yes. You will need an adapter called a "Tesla Tap".
Click to expand...

So would a Tesla tap also work on a Tesla supercharger? I'm new to Bevs as well.
D

Babbuino said:
So would a Tesla tap also work on a Tesla supercharger? I'm new to Bevs as well.
Click to expand...

No. Only authorized Tesla's can charge at Superchargers (they do a VIN verification). Some have free charging, some do not.
B

DucRider said:
No. Only authorized Tesla's can charge at Superchargers (they do a VIN verification). Some have free charging, some do not.
Click to expand...

Babbuino said:
So would a Tesla tap also work on a Tesla supercharger? I'm new to Bevs as well.
Click to expand...

The Tesla Tap is not rated to handle the higher voltages and currents of Level 3 (fast DC charging) nor does it have the communications firmware necessary to obtain authorization from an SC to start a charge and manage it nor has Tesla, thus far, granted any other company rights to charge from the SC network though he says he would do that if another company wanted to use (and support) it.

Would it be possible to build such an adapter? Yes, but while I see how Rivian and Tesla might strike an agreement allowing RIvian vehicles to charge from the SC I don't see how a small company like the one that manufactures the Tesla Tap and Tesla could come to a mutually beneficial arrangement mostly because of the Plug and Charge nature of the Tesla network.

The Tesla tap is really for people who have installed Tesla HPWC (either at home or as a Destination Charger) and subsequently buy a CCS vehicle or wish to accommodate guests with CCS vehicles. I also think it would be good to have one as part of your truck's charging kit. There are a lot of Tesla destination chargers out there. Also keep in mind that Tesla sells Universal Mobile Charger and a rather large assortment of adapters for it which allow plugging into many different types of receptacles. Presumably Rivian will do the same but rather than buy another set of adapters for the Rivian's UMC equivalent someone who has already made the investment for his Tesla could, when venturing into unknown territory, borrow the UMC and adapter set from his Tesla and use it with the Telsa tap to charge his Rivian (or other CCS vehicle).

Edit: All the above stuff is absolutely true but the main reason it can't be used at a SC is that it adapts to a J1772 connector which does not even have the DC pins!
Last edited: Wednesday at 7:32 AM
You must log in or register to reply here.
Share:
Facebook Twitter Reddit Email Link